Julia Ledóchowska is born on April 17th 1865 in Loosdorf/ Lower Austria as the second of the seven children of Anthony (1823-1885) and Josephine Salis-Zizers (1831-1909). In 1874 the family moves to Sankt Pölten, a bigger town between Loosdorf and Vienna. There Julia goes to the school of “English Ladies” (Institute of the blessed Virgin Mary) and receives a humanistic education. In 1883 Antoni makes his long time dream reality by moving with the family to Poland. He acquires a manor house in Lipnica Murowana near Cracow.

In 1886 Julia enters the Ursuline Order in Cracow. After the period of novitiate she takes the vows and receives the name “Sister Mary Ursula of Jesus”. She works as a teacher and educator in the school guided by the Ursuline sisters. She also takes lessons in painting and decorates the chapel with wallpainting and pictures. In 1904 sister Ursula is elected Mother Superior of the Convent.

In 1907, with the blessing of Pope Pius X and accompanied by two other sisters she leaves for St. Petersburg/ Russia in order to administer St. Catherine’s Polish boarding high school for girls. Mother Ursula quickly finds the way to the hearts and minds of the girls. She learns Russian and passes the state exam qualifying her to teach French.

The community of the sisters grows and in 1908, the little branch of the convent in Cracow, becomes an autonomous convent in Petersburg with its own novitiate and Mother Ursula as the superior.

In 1910 on the Finnish Bay, a house for the convent is built, it is called Merentähti (in Finnish: Star of the Sea). Moreover, a boarding high school for girls is established realizing Mother Ursula’s educational ideas. Spured on the love of Christ she quickly attracts the attention of the residents, mostly Protestant people there and the catholic chapel becomes a place of prayer also for the Finns – in their own language.

The outbreak of World War I in 1914 causes the expulsion of Mother Ursula as an Austrian citizen from Russia. She goes back to Scandinavia: first to Stockholm in Sweden, later to Alborg in Denmark. Together with the sisters who gradually leave the war-affected St. Petersburg, Mother Ursula organizes a language school for Scandinavian girls, later a.o. a home for the orphans of Polish emigrants in Denmark. At the same time, she actively takes part in the life of the local Church and gets involved in the activity of the committee established in Switzerland by Henryk Sienkiewicz to bring help to the victims of the War. By giving lectures on Polish history and culture, Mother Ursula sensitizes the Scandinavian society to the issue of Poland’s independence. She learns the Scandinavian languages in order to reach the listeners better.

In 1918 Poland regains its independence. Mother Ursula with the Community returns to Poland. In 1920, thanks to the generosity of the Norwegian consul Stolt-Nielsen, a manor house is bought in Pniewy near the city of Poznan. Here settles the Petersburg Ursuline Community after a pilgrimage lasting several years. The first house, the motherhouse is established.

Soon the Community receives a permission from the Apostolic See to be transformed into the Congregation of the Ursuline Sisters of the Agonizing Heart of Jesus. From an old root sprouts a new branch. It is to live according to the Ursuline spirituality and its tradition reaching St. Angela Merici – the tradition of educational work as a privileged instrument of evangelization, as well as seeking various ways of responding to current needs, especially those of the poor. The Congregation quickly develops. New convents and endeavours in Poland are founded, as well as missions at the Eastern Borderland, from 1928 in Italy, from 1930 in France.

Mother Ursula tells the sisters to love God above all, and to live a life of simplicity, humility, self-sacrifice and creativity in serving others, especially children and youth. She regards smiling, serenity and kindness as the most credible proof of being united with Christ. She teaches that holiness is accessible to everyone and is based on deep love of God and others, shown in performance of everyday duties.

In 1989 Blessed Ursula’s incorrupt body is transferred from Rome to Pniewy and laid in the chapel at the Motherhouse.

In 2002 the Canonization Process is closed. A decree on the confirmation of a miracle through the intercession of Blessed Ursula is published.

On March 5, 2009 the Senate of the Republic of Poland passes a resolution concerning the 70th anniversary of the death of Saint Ursula and proclaims her as an exemplary patriot.

The liturgical feast of Saint Ursula is celebrated on May 29th. 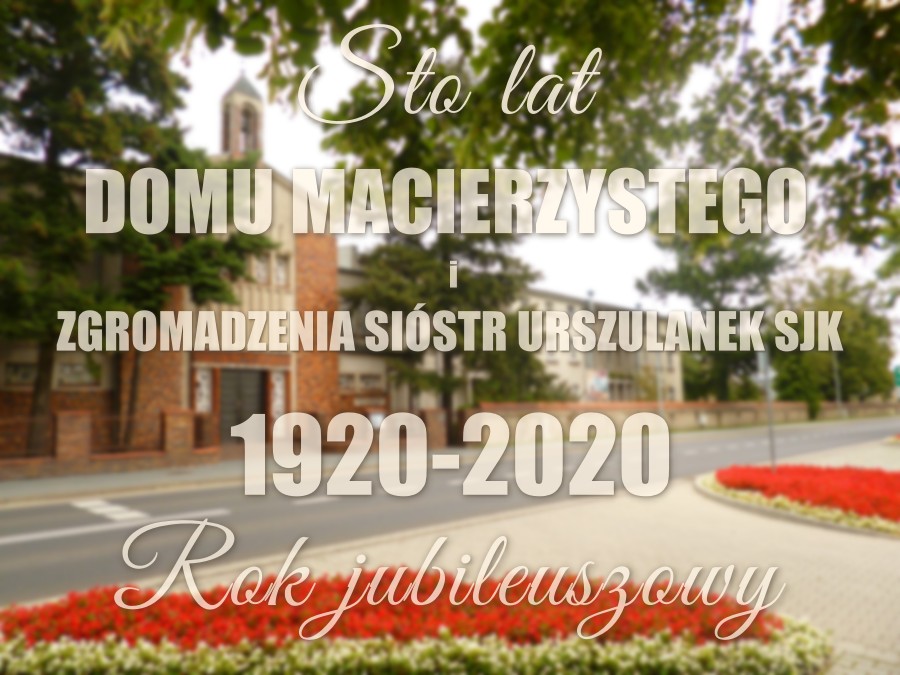